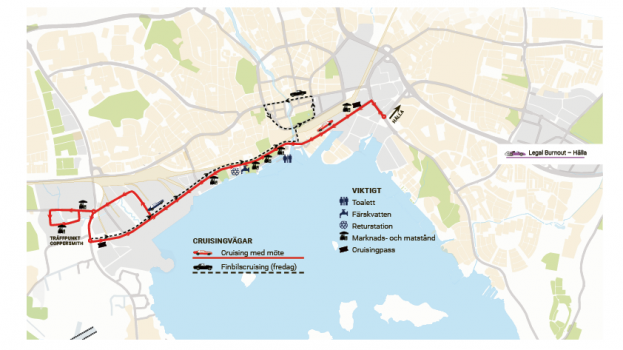 Since we will have to bear a very large part of the costs of order, security and cleaning, etc. in the city this year, now that the city of Västerås does not support us in the same way as before, we will have an extra cost of about 600 tkr. We expect to be able to get some of this by selling cruising passes, just like many other cruisings in eg Lidköping, Falkenberg etc., and the rest we will try to finance in other ways. The price for the passes will be 100 SEK/car for the whole weekend and will be sold at the entrance to the swap meet at Johannisberg, at Johannisbergs camping, Autotec, Hälla and also along the cruising route (see picture) on Friday and Saturday from 17.00,. Our aim is not to make money from a cruising that we don’t want to be organizers of, but we don’t want to pay for it either. Believe us, there is a lot of work around the cruising and there are a lot of expenses, one wishes it just flowed and that there would be no need for guards, cruising hosts, cordons, cleaning etc. 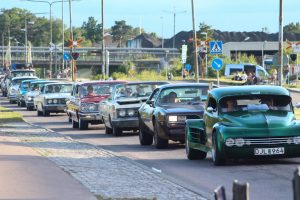 The same rules apply on this cruising route, as those who are allowed on the airfield/swap meet, i.e. all American cars and all cars before 1976. The first year will be a test and then we’ll see how to steer it forward to make it really good. For a cruising to work well there are a lot of things that have to fall into place and most of it is actually on the participants.
The cruising this year is about 1 km longer than the previous cruising distance. For the cruising to work as well as possible, it is important that you who are cruising think of the following things: